After a lot of issues with the flat tire (many tries were not successful) we finally ended up in a nice Cabaña in La Turia where Diego, who came by on his way to his home, was so nice to offer it for free (!) and brought Alex back with a tire that worked at least for some kilometers. After border crossing, which was very easy again, he had again a flat tire 5km ahead of Puerto Natales. We were looking for a hostel and luckily got one with 3 beds available. An endless search for a new tube ended up in a still too small one. But he was able to bring the motorbike to the hostel. Then we said goodbye because they want to go to Torres del Paine by bus for a 5-days trip while I’m going by motorbike for day trips.

Already the way to the national park was nice. And the park itself is indescribable. I found a great camp ground in the middle of the park which was the best starting point for the 3 days.

On my first day I did the Ferrier trail with great view to the glacier and over the park. Afterwards I did a boat trip to the glacier Grey including Pisco Sour in front of it.

Even though the weather forecast said rain for the next days I just had some little on my second day when I was starting to the mid of the “W” trail in direction to the glacier Francés. At the beginning I saw a rainbow from the catamaran. And then I got so many beautiful views and interesting bridges along the Rio Francés.

Unfortunately the glacier Francés is shrinking as well as the glacier Grey. On my return I found manzanitas (a berry like a little apple) as well as the famous Calafate but one of last ones and a bit wizened. Even if the rain came for half an hour I got wonderful impressions and finally the wind dried my clothes quickly.

On my third day I was awaken by a moderate breeze and my view out of my tent surprised me. Almost no cloud and the sun was shining. So I refused my plan of a recreation day and started at 10 a.m. at Hysteria Las Torres for the final trail to Base de Las Torres. Already the beginning was cumbersome because it was going up and down.

And after 2 hours I reached Campamento Chileno. Enforced by freshly baked Empanadas I followed the nice trail along the Río Ascencio and ended finally at the Base. I’m so proud that I made even though my knee hunted a lot. But I got rewarded! 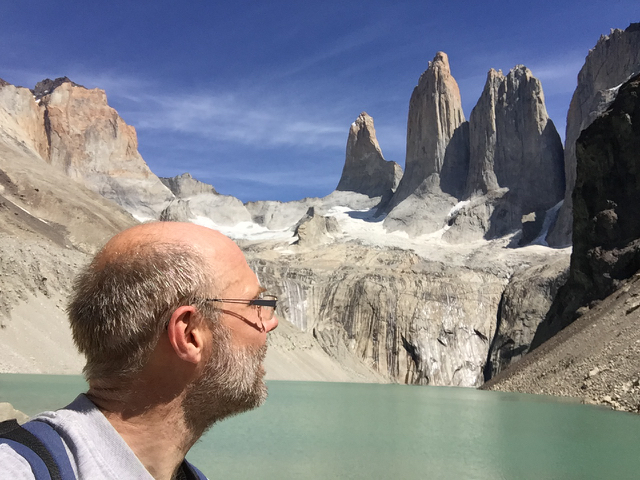 On my return I I saw things I didn’t see on my forward run. Back at 6.30 p.m. I asked in the hotel if I can use the SPA area even if I’m not a hotel guest. “Por supuesto” – Of course. And so I got a hot shower with shampoo and towel including 30 min. sauna for $7.000 (€ 10,-) and as nobody else used the massage service I took this chance. Wonderful. On my way back to my tent I had a wonderful sunset.

I met my neighbors from Berlin and they told me that an armadillo “checked” my tent.

armadillo that ate my oatmeal

Indeed he served up my “living room” and… ate my oatmeal. But it was so fair and left over some for my breakfast…

The next day I had to say goodbye to the park and drove to Punta Arenas via Puerto Natales where I bought a new headlamp as mine got broken (so, I had the right spare part with me and replace it now). The road is boring. Nothing than steppe and … a fox that crossed my street.

Arrived in Pto Arenas it was not easy to find a bed but finally got one in Barefoot Backpackers. The next challenge is to get a new tire for my motorbike even though this city is quite big. In the end I found in a little street a dealer who stocks parts for a rent company. And they he has a Heidenau. But it costs $154.000 (€ 210,-). And so I decided to go to Ushuaia first and on my way back I will change the back wheel.